What Games can Teach Us About Engaging Work

For most of us who came of age in the 2000s, we all have fond memories of playing the original Pokemon games for GameBoy. I still remember my first experience playing Pokemon -- the joy of selecting my starter (Charmander ftw), how engaging the dialog was between the main character and his rival, and the excitement of trying to find and catch rare Pokemon.

However, there was one aspect of the game that was particularly repetitive: 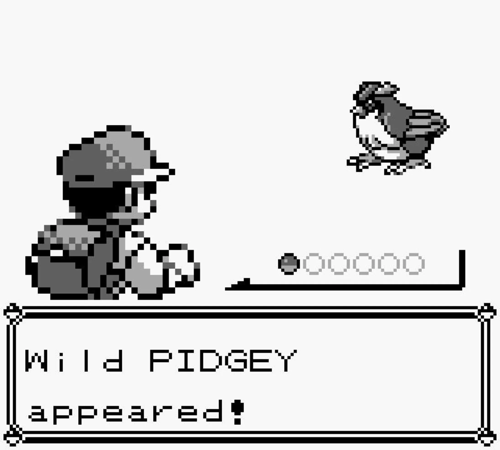 After losing the first gym battle against Brock, I chose to take a common path for trainers everywhere -- brute force your way to level ups through sheer repetition.

I would stroll back to the tall grass and start sprinting back and forth hoping to grind my way to victory by destroying pidgeys, ratatas, and spearows over and over again. This wasn’t an interesting task -- all you had to do was mash the A button over and over again, then run around in circles in the tall grass and repeat. Occasionally, you’d have to sprint back to a Pokemon center to regain health.

Despite this being an objectively repetitive and boring task, my mind at the time felt super engaged. I wanted so badly to defeat the next pidgey and achieve that level up, and I could easily lose track of time completely entranced in this cycle of defeating pidgeys and watching my experience bar fill up; it was addicting.

The Components of Addictiveness

What made this objectively mind-numbing task so addicting? In my opinion, we can boil it down to three main components:

It barely requires any effort at all to run around in the tall grass in Pokemon, encounter a pidgey (or some other weak Pokemon), and tap A a few times to receive a slight boost in Exp. points. The total turnaround time of this entire process is maybe just 30seconds or less.

Similar to sitting in front of the TV with a giant bag of Doritos already open and sitting in your lap, it’s hard to resist doing another 30-second Pidgey fight when it’s just so easy. Now when you cycle through this thought process repeatedly, 30 seconds can turn into 30 minutes without you even realizing it.

2. A Feeling of Progress

After a while, the game gives us the feeling of achieving these sub-goals which validates our hard work in beating up pidgeys:

After a sub-goal is reached, a new goal is put in front of us and the cycle repeats again.

This cycle of work → reward → new goal is part of what makes this monotonous task so addicting to us.

In Nir Eyal’s book Hooked: How to Build Habit-Forming Products, he identifies that one of the main factors that make a product habit-forming is “Variable Rewards,” as in the reward we get each time is slightly different, similar to how a slot machine dispenses rewards.

In our Pidgey example, this concept of variable rewards applies as well. After we defeat each successive pidgey, we know that we’ll get some amount of experience, but we don’t know exactly how much. In particular, we’re trying to clear some experience number to increase in level, which triggers even more variable rewards such as potentially a new evolution, stat increases, and new moves learned for our Pokemon. We don’t exactly know how many pidgey fights it would take to clear these bars though which is what makes this activity so engaging for our brains.

Use Addictive Properties to Your Advantage

Knowing some of these properties of addicting tasks is useful because we can structure actual tasks that we need to get done in our lives in a way that maximizes our brains’ engagement and attention. We all have errands and boring tasks that we need to do as adults like taxes, studying, homework, etc. Knowing how to structure these tasks can make a big difference in how long you procrastinate and how you approach the task (whether you see it as fun or boring).